I was looking through photos on my computer the other day and came across this one, taken by Jill last August in New York.

While part of me sort of let out a tiny little cry at how small Emma was, another part of me reached out and gave a giant pat on the back. My goal for nursing her was a year. We’ve surpassed that goal and we’re still going strong with no signs of stopping. I’m totally okay with that.

She’ll always be my baby, but Emma’s a bonafide toddler with the adventurous spirit (and attitude) to go with it.

She doesn’t nurse as often or for as long as she once did, but she’s still firmly Team Boob. Nursing is about more than just food.

It’s about comfort and connection and it makes us both slow down and makes me pay attention to the tiny little things about her that are growing bigger and bigger by the day.

Like the way her hair has a little curl on the ends and sometimes twists up over her ears. Or how she seems to chronically have some piece of food crusted in her eyebrows.

(Hey, I didn’t say all the things I notice were sweet, okay?)

Emma’s a little firecracker and she’s always on the go. Moving and running and exploring. The fact that we’re still nursing hasn’t affected that part of her at all.

Breastfeeding a toddler looks very little like the relatively serene picture above. In fact, it looks a little something like this picture here, taken with my cell phone in the waiting room at Joshua’s therapy appointment. Only it’s often a smidge more crazy than this: 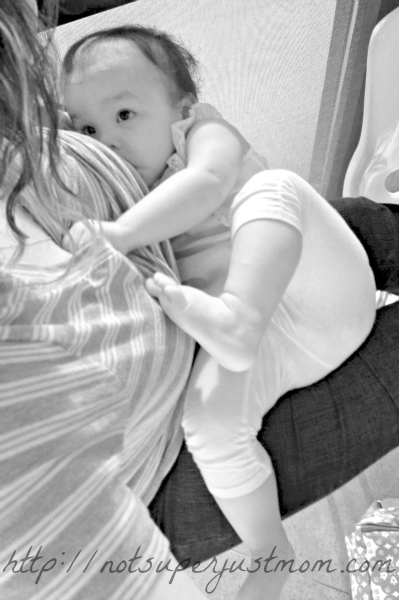 Now when she nurses, instead of always snuggling into me like she used to, there’s a foot in my throat, she’s pulling on my necklace, and her index finger is making its way into my nose.

Or she’s blowing kisses at my boob. Or raspberries.

Or she’s nipping me and laughing about it which gets her put down immediately and then she cries.

Or she’s perfecting her famous “nurse and roll” maneuver where she attempts to roll over while my boob is still in her mouth.

Or she’s trying to get down and run away while still trying to nurse which is always fun and also sort of painful because while my boobs will never be what they once were and will no doubt be slightly mishapen when this is all said and done, they’re not actually made of elastic and I can’t stretch them across the room. But she doesn’t know that.

But sometimes, oh, sometimes she still feels so small and I have flashbacks of her tiny days.

Her head rests perfectly in the crook of my arm and she puts her hand over my heart and she and I just are. She nurses and pops off and looks at me and smiles, sometimes letting out a tiny giggle, sometimes a tiny sigh.

Or her eyelids flutter as she starts to fall asleep and her contentment is palpable.

There is nowhere else she would rather be in that moment than right there with me and my Mama Heart is full.

[…] first week of August is World Breastfeeding Week. Emma and I are almost 16 months into breastfeeding with no signs of […]

It's when I read words like your that I get sad about not being able to breastfeed my kids. (I needed the meds so that I could be present for them, it wasn't an option not to take them in my case, and I'm okay with that.) Even though I didn't get to BF either of them, I did still form very strong bonds with them through kangaroo time and carrying them in slings when they were little.

Loved reading about your experience as a BF mama. It's like I can live vicariously. :)

Toddler nursing is pretty amazing, mostly because you know it's their choice to be near you. They don't *have* to have it for nutrition. They *want* to feel that bond with you. Of course the nutritional value is still there, but for that small moment, you're reminded that you're needed, no matter how wild and independent that toddler may be at all other moments.

Each of my children have nursed progressively longer. The first was 16 months--over the year mark! I was amazed! And then the second just kept right on trucking until literally her second birthday, when she decided she was two, obviously grown, and done. She laughed at me when I offered to nurse her for bed. What a great thank you. And now, the youngest will be 3 at the beginning of July and still nurses right before bed. To be honest, I'm not sure he's getting any milk at all, but he likes to pop on there for a second to calm down before my husband takes him to sleep in his own (squeeee!!) bed. I can tell we're almost done. I didn't intend for him to nurse this long, but I'm grateful for it. He could be my last nursling. We're down to once a day. And I've been nursing for over seven years now.

I guess I should be ready for a break, but it's bittersweet, because of all those little things you mention. When they stop nursing, they're big kids, and that's the happysads.

I literally laughed out loud & for teary because this is exactly Lucy & I now. She nurses trying to be in a plank position & I have to remind her that (hopefully) my boob can't be pulled quite that far. Or she digs around in my armpit which is just awkward. But at the end of a long day, that sigh & curls & closed eyelashes are amazing for both of us.

Zach is of the eat & run variety. Speed nurses so he can move on to the next thing. l savors her mommy boob time.

Amelia just turned 1 and is still going strong. I made it to 16 months with my son, but the calorie burning benefits have enticed me to let her go as long as she wants. BUT... the wiggling and tugging and rolling... Lord only knows what shape these girls are going to be left in when she is done!