A couple of months ago, I asked Joshua what kind of party he wanted for his 4th birthday. (4th!! AHH!)

Uh, okay, kid. Way to make this difficult-ish. Good thing I love to throw a party. 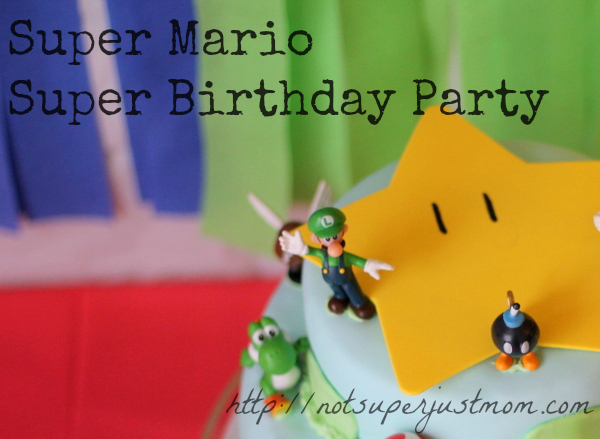 To say that Joshua is obsessed and in love with all things Super Mario Brothers is a bit of an understatement. One day Dan showed him Mario Kart on the Wii and then he started playing Mario Kart. To our surprise he picked it up quickly and was really pretty good at it.  Then he found Super Mario Bros. Super Show on Netflix and the obsession grew.

When he asked for a Super Mario party, I gulped a little and then dove in to planning it by scouring Pinterest and party sites for ideas. I’m pretty impressed with how his party turned out if for no other reason than I tackled fondant. 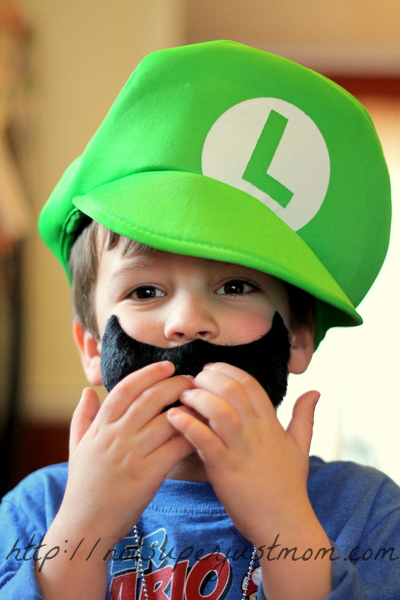 Luigi is Joshua’s favorite. I’m not sure if there’s any particular reason for that, but he is. I think it’s kind of sweet that Joshua digs the less popular brother. When I saw this hat and mustache on Amazon, I knew Joshua would love it.

Now, for the rest of the party goodness:

The start of a party is the invitation. It sets the tone and theme and also lets guest know when and where to show up. I’d say that’s pretty important information.

I tend to shy away from party packs when I’m planning a party. I’m kind of a control freak so I like all aspects of a birthday party to be exactly what I want. And while I’m the one doing the work and Joshua’s input only extends to theme, I’ll just go ahead and own my control freak status. 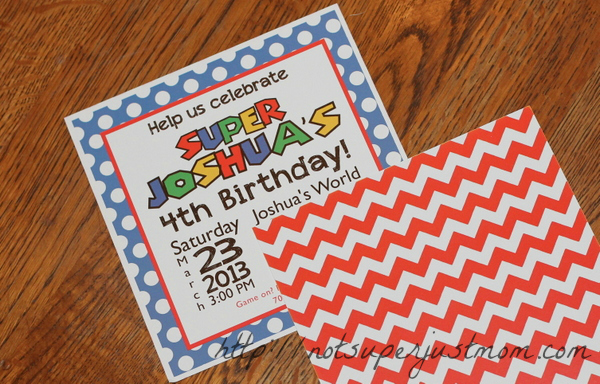 Brooke at Graham Cracker Design is my girl when it comes to birthday invitations.

I knew I wanted a square design for his invitation, despite the additional postage. My original idea was to have the back of the card be the gold question mark box from the Super Mario Bros. video game. But when I sent them to Zazzle for printing (love, love, love Zazzle!!) they were kicked back for having licensed images. Huge oops on my part. In my zeal to plan his party, I didn’t even think about trademark and copyright. Zazzle had my back and so did Brooke.

It took us several tries to get it just right and I probably made her crazy, but I’m in love with the finished product. I thought I selected full bleed printing on the front side when I was finalizing the product on Zazzle, but didn’t. So that’s my fault. Oh well. Still cute.

After the invites were in the mail, it all came down to decor and food and waiting for party day. 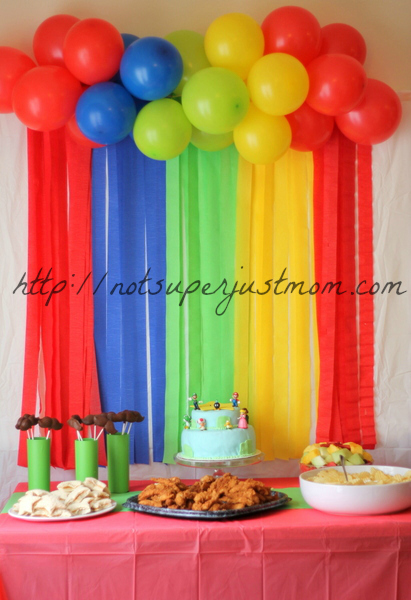 Since I wasn’t using the party pack decor, I needed to bring out the theme of Super Mario–or Luigi as Joshua kept insisting–with the decor. I’m also kind of lazy, so when it comes to decorating, I don’t really go all out. Something around the table, maybe a thing or two on the mantle, but that’s usually it.

My original plan for the table used a fabric table cloth and a red and white chevron runner. Then I couldn’t find any chevron fabric at the store. (Also, a root canal is preferable to Joshua in a craft store.) So, I punted and used plastic table cloths in red and another in green for the runner.

For the backdrop, I taped a white table cloth to the wall so the beige wouldn’t throw off the look I was going for and then taped the streamers to the table cloth. The balloon banner took me about an hour of blowing up and tying balloons to a piece of twine. Fishing line would work but I didn’t have any and did have twine, so twine won. I put two screw-hooks into the wall and tied loops on the ends of the twine to hang the balloon banner from the hooks. 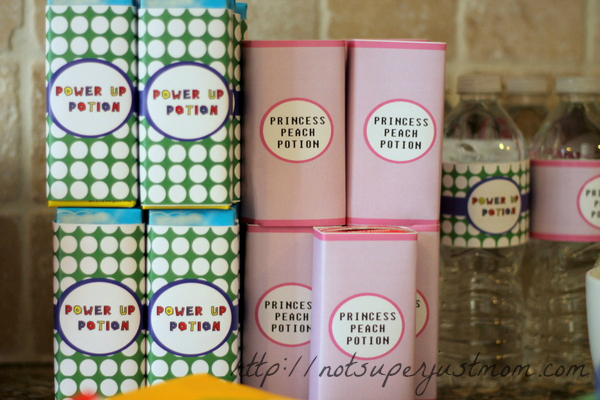 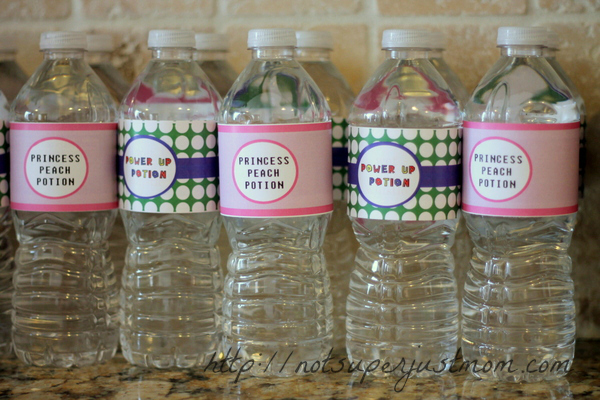 Juice box and water bottle labels are where I fully admit my party planning psychosis. I can’t help it. They’re just fun. Brooke was in the middle of a move, so Lauren and Jamie swooped in and saved me. I owe them much thanks and high fives and other goodies, perishable and non, for coming to my rescue.

I sent the labels to FedEx Office to be printed, picked them up when we went out for dinner, sliced them on a scrapbooking slicer, and then Dan affixed them with glue dots. I have a love-love relationship with glue dots. They should be in the arsenal of every remotely crafty person. 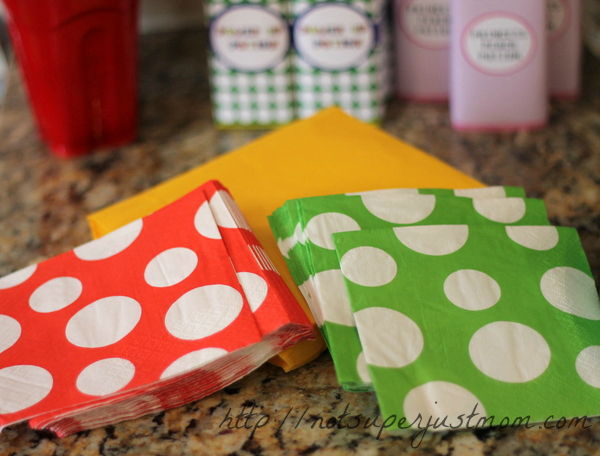 I had planned on solid colored napkins to make things a little easier but saw these at Wal-Mart and loved how they represented Toad and the 1UP mushroom! 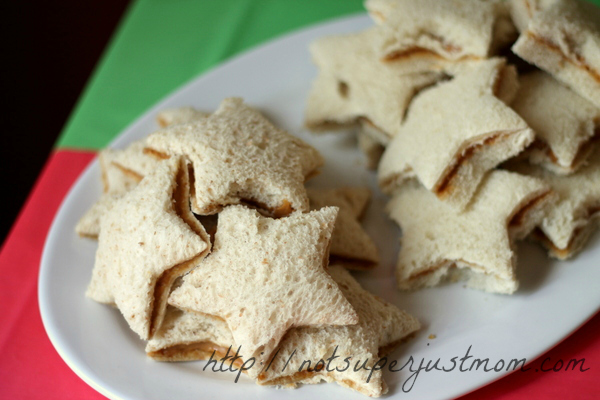 Joshua is a fan of peanut butter sandwiches. They are one of his 5 food groups. He prefers honey roasted peanut butter and hates jelly, which is perfect because globs of jelly all over the floor would’ve been a disaster.

I always try to serve foods I know he’ll eat at his parties, but I didn’t want to throw out a plate of plain old peanut butter sammies. Cutting the sandwiches into star shapes carried out the theme and made the sandwiches fun for kids and adults.

(None of the guests at Joshua’s party had peanut allergies, so I was safe. Please check with your party guests before serving peanut butter. That should go without saying, but I just want to throw it out there.)

The rest of the menu consisted of chicken fingers, chips and dip, and a giant bowl of cut fruit from the grocery store, with chocolate mustaches and cake for dessert. 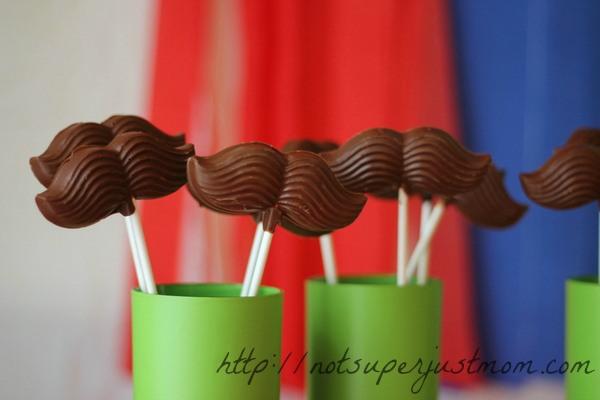 Mario and Luigi wouldn’t be Mario and Luigi without their giant mustaches, so when I saw these I knew they had to happen. This was my first time working with candy molds and I’m surprised at how relatively easy it was. 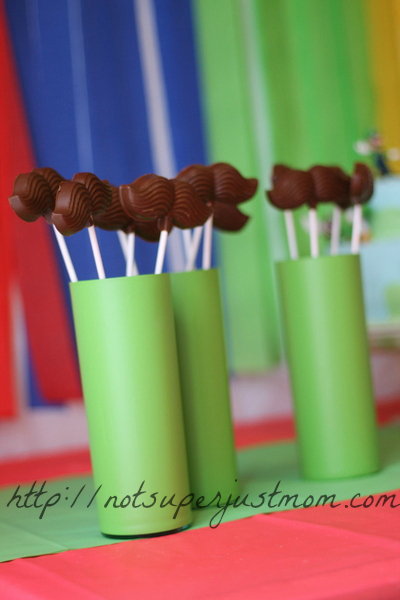 To make the tunnels found throughout the Super Mario games, I used green vinyl paper from the scrapbooking section, the kind you would cut with a Cricut or Silhouette, and wrapped it around some highball glasses.

Dan wrapped the vinyl. I was having trouble getting things to go on smoothly and I was getting frustrated with it so he took over. Then he showed me a trick! When you have tiny bubbles in your vinyl, pop them with a prick of a razor or straight pin. You can push the air out of the bubble and the hole won’t show up! I stuffed napkins into the bottom of the glasses and filled the top with plain m&ms for stability.

The mustaches were a hit. HUGE. 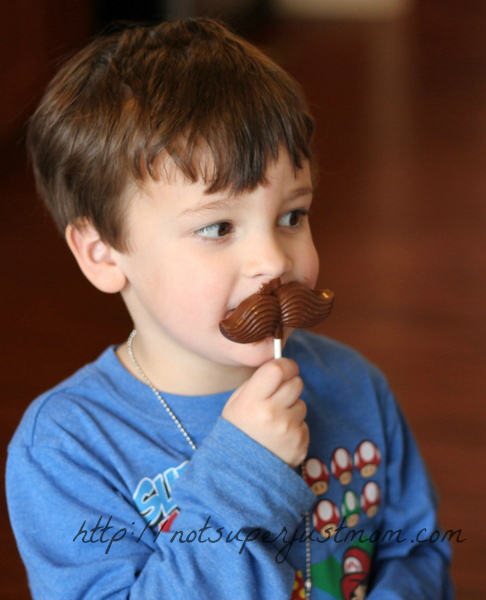 I think the mustaches were a bigger hit with the kids than the cake. I’ve loved looking at all of the pictures of kids with their mustaches.

My favorite part of the party, however, was the cake!

I normally do cupcakes for birthday parties because they’re easy and single-serve. There’s no cutting and no fuss. But this year, I decided to tackle something new: Fondant.

I used the recipe from that link and tweaked it just a little. The first batch of fondant that I made was too hard and gummy and stuck to everything, including a Silpat mat. When I made the green fondant, I dumped it out of the bowl and started kneading it before it got to the point that I could no longer stir it. I had to knead it for longer, I think, but the texture came out better.

In my hours and hours of searching the internet for ideas, I came across these Super Mario figures on Amazon. (Not an affiliate link.)

I bought multiple packs so that I would have a variety of characters to decorate with and so that Joshua could play with them after the party was over.

He picked which of the characters he wanted on his cake and told me where to put them. I put a little bit of green frosting on their feet and stuck them to the fondant. The yellow star on top is a foam star from the Dollar Spot at Target. I drew some eyes on him and boom! Cake topper. 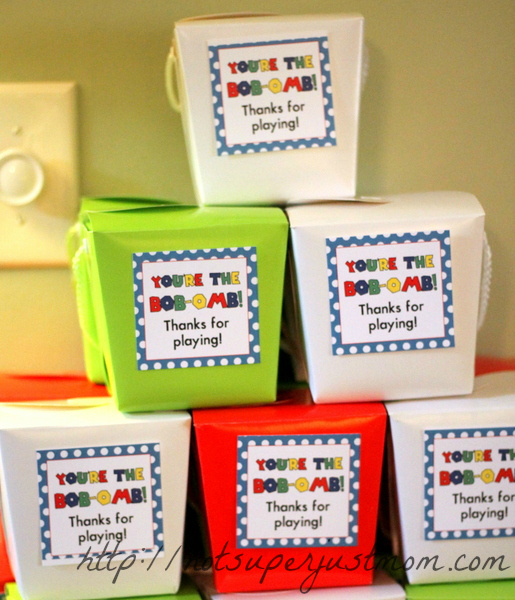 Jamie also helped me with these. I should’ve taken a picture of the inside, but I was lucky to remember to snap this photo on party day. Party favor buckets contained: a pack of Goldfish crackers, a small bubble wand, a sheet of Super Mario stickers, and a Bob-omb candy.

As for activities, I didn’t really plan any. I don’t usually. There were 13 kids here, so planning activities kind of felt like herding cats. I did clear off the train table and some of the figures I bought were pull back Mario Kart racers. My plan was to put lanes on the train table and let the kids race, but they were having too much fun running around and chasing each other and I’m not one to mess with a good thing.

And it was definitely a good thing. 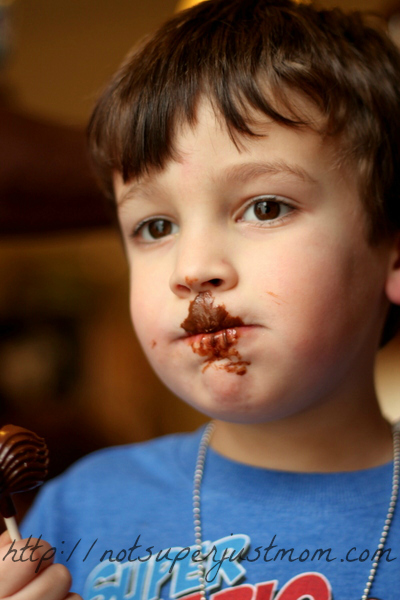 I love throwing parties. Even if I made myself a little crazy, I had a blast and I know Joshua did, too. Emma loved monstering around and chasing after the big kids. Dan wishes I weren’t insane. After Emma’s party (coming up in two weeks!) he’ll get a whole year off!

Thanks for the inspiration! Love your ideas! Love the Balloon and Streamer decor! Planning my sons 5th Birthday! Thanks for the great ideas!

[…] turned five, you guys. Five feels so huge! It really feels like just yesterday I was planning his Super Mario Super Birthday Party but no, nope. I was recently tasked with planning a FIFTH birthday […]

[…] that Joshua has a certain fascination for the Mario Brothers. It hasn’t waned since his Super Mario Super Birthday and has in fact only grown stronger. Sometimes changing his mind 5 times in as many minutes, he […]

Love the ideas! It sure helped me to gather ideas for my son's 1st birthday party :) Thank you!

Very creative. Especially the water bottles. I just added it to my birthday party ideas board on Pinterest - http://pinterest.com/mommytalkshow/birthday-party-ideas/