One of my 31 for 31 items is to say “yes” more often. Recently, I’ve decided to start saying “yes” to myself. To make myself a priority in my own life.

I hired a nanny. For one afternoon a week.

Just one afternoon, for two or three hours, to recharge my batteries and be alone. Except in public, so not alone.

Whatever. No one’s touching me.

Until recently, like maybe just in the past couple of months, Emma has screamed any time anyone so much as looked at her. The grocery store, the doctor’s office, Target. If they looked at her, she would scream like she was being abducted by aliens who planned to do tests on her cute little baby toes. And they are adorable so I can totally see why aliens would want them.

And then I noticed that she was screaming less and looking more.

And then I noticed that when we picked Joshua up from school, she wanted to get down and run away from me.

Seriously. I would go toward her and she would turn and go in the other direction.

It was like her little baby way of saying “Hey, Mom. You know? I think you’re awesome. But so is the world. I’ve got this. Now scoot.”

So I called up a former student who had offered up her services as a sitter and basically shouted “YOU’RE HIRED!” the minute Emma didn’t scream at her.

Well, okay. No. I sort of eased Emma into it.

I had the sitter come over for a full day with me there so Emma could get used to another person in the house. And so I could clean without Emma coming behind me and destroying my work. It was glorious.

And then Dan and I went on a date and had a real meal with no children nagging us for whatever it is they would nag for at dinner. That was also glorious.

I’m quick to put myself on the bottom of the totem pole when it comes to whose needs get met in a given day. I don’t think or believe that moms are supposed to do that, but it’s something that I’ve sort of fallen into.

But that was all at the cost of my own sanity. Or, maybe not sanity. But I was suffering from some burn-out.

Self-care is important. I’ve advised it to many a PPD mom without actually putting it into practice for myself.

I’m not cheating myself out of self-care by pretending that a glass of wine while I work in the evenings is me taking care of me because it’s not an acceptable substitute for the peace and solitude that comes with being surrounded by strangers in a Starbucks. 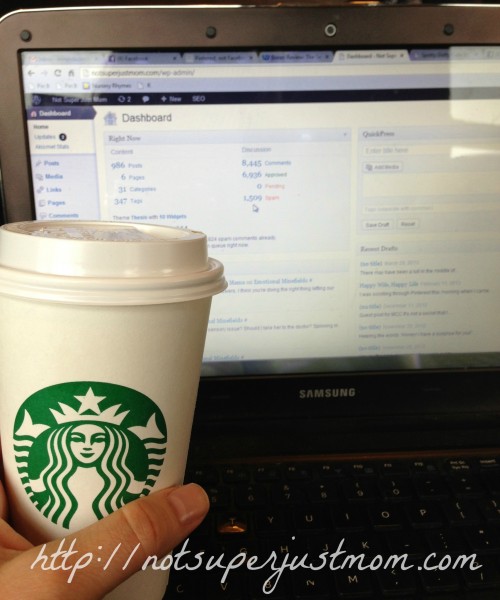 Yay! I'm glad this is working out!

yay for you! It'll be great to see how this small (big) change will affect things for you. You should revisit this in a few months with an update post similar to those who blog about weight loss and the like. LUFF!

Rachel @ The House of Burks

I think this is fantastic. I have to have some me time or I will lose it. Currently I play tennis twice a week, and I'm going on a girls trip at the end of this month, which will be the first time I've been away from my whole family since the kids came along. I can't wait!

The other day, I was just thinking "one day -- one day where someone doesn't use me as a climbing wall, that's all I need."

Love this-- it is HARD for me to say YES for myself, but I MUST more often.