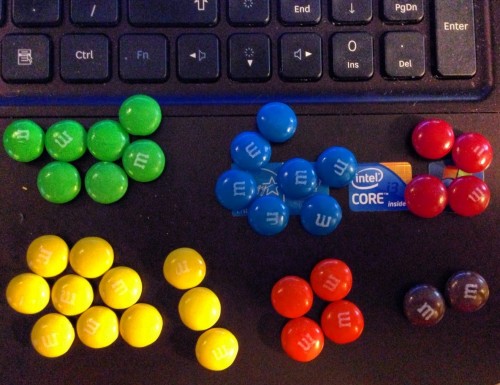 Neurotic candy eater. Party of me.

It started in college.

An 8:00 a.m. Bio class in a cold lecture hall, with dimmed lights, and Ben Stein’s brother READING HIS NOTES to us. The same notes he put online for us to print and study. And then he read them. And my head got really, really heavy until I felt my nose grazing the papers on the tiny fold-out desk covering my lap.

Something had to happen. I had to find a way to stay awake. If not to pay attention, then at the very least to keep from drooling on myself and the people shoved into the theater seats next to me.

There was a little cafe/snack bar in the Bio building, and I started the habit of stopping in on the way to every class.

The “biscuits” were vomitous.

So, I settled on m&ms. Sometimes Peanut, sometimes plain. A bag of each if I was feeling especially hungry. With a Diet Coke to wash it all down. (My preference would’ve been Diet Pepsi, but alas, I am a rebel in the state Coca-Cola built.)

I estimate that I spent roughly a student loan check’s worth of my cold, hard cash on things to keep me awake in that class. And probably 50 times that much in calories.

I’d get into the lecture hall and make myself comfortable-ish in the theater seats with the fold-out desktops that weren’t big enough for my notebook and sort my candies.

A pile for each color.

This candy sorting habit dies hard. In that it doesn’t die and is still alive and well 10 years later.

And also, D is for Diploma.

Wait, I had bio in a lecture hall freshman year at 8 am. We had a snack cafe in that hall, too but I never found anything to keep me awake. I got my first and only D that year... In Bio. Thanks to all of the sleep I got in that class.

I actually have M&M's and college to blame for my first credit card. I could NEVER MAKE IT to my 8AM classes and one day I was super extra tired and hungry and broke and had no food and they were giving out free GIANT BAGS of M&M's (at 8AM!) if you applied for a credit card. So I applied, got the credit card, ate the M&M's, felt better in class that morning, and was still paying off that damn credit card for, like, 8 years.

Totally do this - with one difference... A difference that might make me even more neurotic! I start with the colour that has the most and only eat one from that group, then the second most, etc.. until all the piles have the same number in them, then I continue eating one from each pile until I have only one left of each! Then it's just a matter of preference and that could change daily. Oh and as far as preference goes, m&m's over smarties everyday!!

This is what I do. I eat one from all of them that have the most until they all have the same number. then one of each until there are none left.

Also, I prefer skittles to m&m's. Except peanut m&m's are pretty awesome.

Oh yes, candy sorting, love it! I do it with skittles and starburst. And then I eat them in order of preference - the ones i like the least (lemon) first :-) I'm glad it isn't just me, I was getting a little concerned about my habits when I went through the kids Halloween candy...

not only have i fallen asleep in many classes, i also suffer from candy sorting disorder, i'm pretty sure it started when i was in grade school though, so for me, it's been closer to 25ish years. i sort it exactly the same way that you do, sometimes i eat the piles least favorite to most favorite, and sometimes i like to even the piles out first and then eat them least favorite to most favorite. i also eat them by pile size from time to time. never m&m's though, usually skittles, starbursts, sprees or mini chewy sweet tarts. i rarely eat those things anymore, but when i do, i still sort them, like the skittles i stole from my daughter's halloween candy last week. i never tried using this obsessive compulsive behavior as a technique to keep myself awake in class though, maybe if i had a would have learned more.