Lately it feels like blogging is bringing me neat/fun/cool/refreshing/interesting opportunities. One such opportunity came last Thursday night when I was invited by Meghan of JaMonkey to attend a Graco Home Party to introduce their new Graco Snugride Click Connect 40.

I’ve had many a meltdown over our current infant seat. (A Graco Snugride 32) Our seat is great. We chose it for its weight limit and consistently high safety rating for the value. Except I have and will always hate the fabric pattern we bought. (It was the right price. We were kind of broke when we were expecting Joshua.)

I cried when we bought that seat and later had a moment of “oh, my, a baby will go in there!” that convinced me I was okay with it. When we pulled the seat back out for Emma, I cried. Again. Because I still hate the pattern.

(I realize that the fabric pattern of the seat is a total First World Problem and in the grand scheme of life, not such a big deal. But to an overly hormonal pregnant lady? It’s up there with the RPatz/KStew fake break-up in terms of the irrational ability to make people do the crazy cry.)

The Graco Snugride Click Connect 40 is the first and only newborn-to-2 year old infant seat on the market and is designed to keep up with the AAP’s new recommendations to keep your child rear-facing for 2 years or 40 pounds. It accommodates a rear-facing child to 35″ tall. (Joshua was just over 35″ at his 3 year appointment in April!) 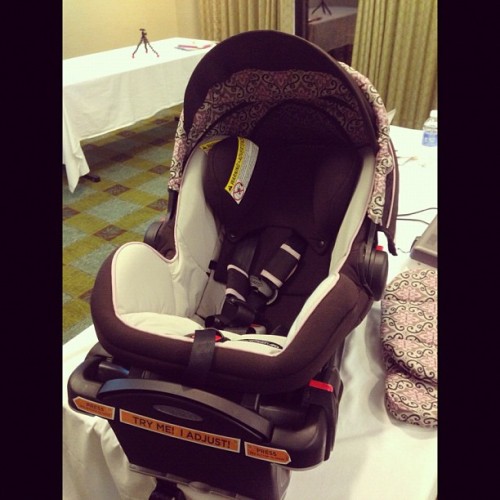 Having seen firsthand the nightmare that is watching a family as they wait and see after an accident in which the infant passenger is injured due to being improperly restrained, car seat safety is something about which I feel passionately. Thankfully, that boy is okay today, but knowing that it could’ve been a parent’s worst nightmare outcome has made me vigilant.

This car seat is cool, y’all. And neither pattern makes my eyes weep the wet, salty stuff. (The pattern above is Mena. Pink and brown. Swoon!)

But the home party was sort of more than just an opportunity to learn about a new car seat for me.

It marked the first time I’ve been apart from Emma since June (aside from one night at BlogHer when Diana and Rebecca watched her for me).

Y’all, I’m serious. Not even a trip to the grocery store or Target sans baby. Since June.

I put on a dress! And heels! (I was way overdressed and felt mildly uncomfortable!!!!)

There was adult conversation! 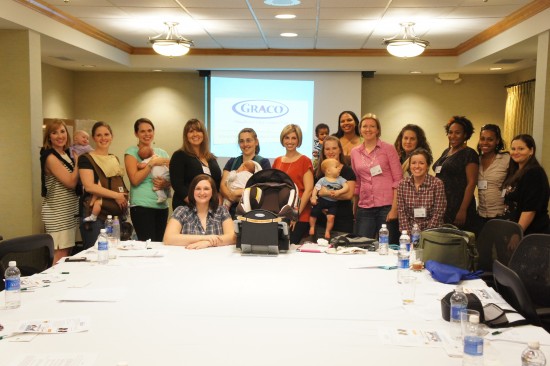 I ate a meal that was infinitely better than anything I could’ve thrown together in my own kitchen probably because I wasn’t making it myself. Or cleaning it up! And plus, CAKE POPS. 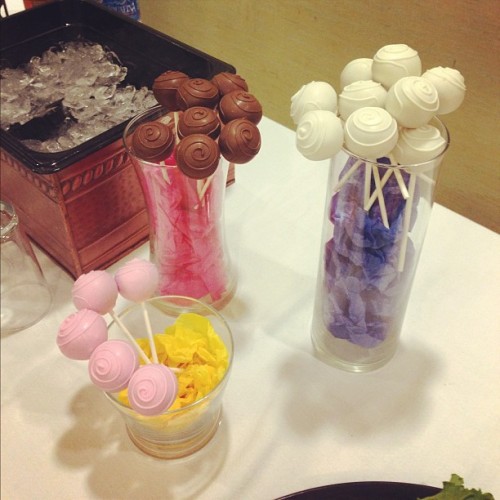 Thanks to Meghan, Graco, and the SITS Girls for hooking up this event.

The Graco SnugRide® Click Connect™ 40 – the first and only newborn to two-year infant car seat that actually grows with your baby from four pounds all the way up to 40 pounds. The car seat is designed for a parent on the go. The infant car seat can be easily removed from the base and used as a carrier when the infant is small, providing portability and convenience so you can easily move your infant in and out of the car without disturbing them.

The American Academy of Pediatrics recently made the recommendation to keep all children in rear-facing car seats until the age of 2. Graco set out to make this product so parents can keep infants rear facing longer while still keeping them comfortable.

This is a sponsored post written by me on behalf of Graco. The opinions and text are all mine.