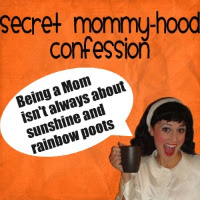 I was raised a Baptist all my life. I’m about to have my child anointed with oil and prayed for. And then I’m going to convert to Pentacostalism and have the ministers there lay hands on him. And after that, I’m converting to Catholicism and having an exorcism performed, complete with an old priest and a young priest. And to round this all out? I’m contacting a  Buddhist monk so he can do whatever it is Buddhist monks do.  And we may even suss out a shaman or two. Or a voodoo priestess.

(And yes, I’m aware that conversion theory is probably some complex and ridiculous physics or mathematical concept that would blow my face off if I tried to understand it.)

(And yes, I’m also aware that I likely just offended half the population of the Universe with the above references to various religions. I assure you. No harm meant. This is all in good fun, people. Except I’m serious.)

Y’all? I am in need of some remedy here.

The next year of my child’s life might reduce me to a rocking-in-the-corner, drooling-on-my-shirt shell of myself.

We cut Joshua’s hair and it is like the reverse of when Delilah cut Sampson’s hair in the Old Testament.

Instead of losing all of his strength, he has found that he can more easily protest too much about everything on the planet that must be out to ensure that he is never happy now that the weight of his locks isn’t sucking the oxygen from his lungs.

It is like he believes we have ruined his life and he has jumped straight to angsty pre-teen without the benefit of WORDS to tell us he hates us. Instead he just screams in our face. Which is probably exactly what the teen years will be like if my experience with actual teenagers is any indication as teenagers do not actually know words either.

There is something about this hair cut that has filled him with piss and vinegar and screams of evil. 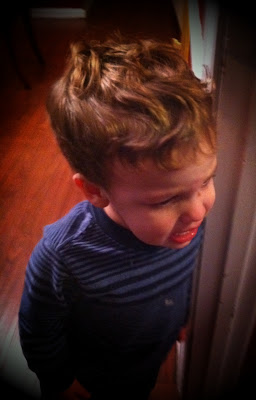 This face of the general unhappy and peeved? Has been with us since about Wednesday evening. And not three seconds before this picture was snapped, he was attempting to eat the chair railing in my dining room. While it was still on the wall. And then he slapped the wall as if it had committed some grievous offense. Like a “Yo Mama’s so fat” joke or something.
I cannot decide if the terrorism is due to the two-year molars that are currently attempting to grace his mouth with their presence or if he is rebelling against a hair cut he didn’t want or if this is just our “new normal.” Again.
But Joshua? Is most certainly becoming a Tiny Terrorist.
And if this is what the Terrible Twos will be like for the entire duration of the upcoming year of his life??
Then at least there’s wine. For me. Of course.
Click here to cancel reply.