Things are finally getting somewhat back to normal around here.  It only took the child a week and a half and a round of antibiotics to adjust to DST.  But, we seem to be adjusted.  Finally.

This morning was kind of a pain in the bootycakes.  Dan had to leave early for work which meant that I was flying solo on getting Joshua and myself ready and out the door by 7:15.  We totally didn’t make it out the door until 7:26.  Bummer.

You see, I’m suffering from an acute case of what I like to call OverIt-itis.  Because I’m completely, totally over it. The week before a week long break is always looooooooong.  All week this week, I’ve gone “Holy crap is it only [insert day of week here]?” The kids are restless. I’m losing it. We’re all just about ready to climb out of our skins.

I’m also tired of wearing dress clothes, which is the reason we were running late this morning.  In addition to suffering from that point in the month where nothing fits except a mu-mu, I am honestly tired of dressing up.  I just don’t want to. I don’t want to put on any clothes. I don’t want to wash my hair. I just want to sleep.

And I am apparently incapable of giving a big middle finger to The Man and wearing blue jeans on a non-sanctioned blue jeans day.  I figured that out this morning.  I am terrified that it’s my luck that I would be the person they chose to make an example of and there’d be a “note in my file” or something ridiculous about how I was insubordinate by wearing blue jeans.

Yes.  I really did have that conversation with myself this morning.  I psyched myself out of being a rebel and wearing blue jeans instead of dress pants because I’m a rule-following pansy.

Somehow, I managed to get my breakfast, lunch and coffee packed and loaded into the car, get Joshua dressed, give him his medicine, get in the car (while he was screaming at me and I was saying, firmly, “Joshua. STOP. SCREAMING.”…because I can totally rationalize with a 20 month old, right? o_o )  and still make it to work by 8:00.  (Helloooooo, Supermom.)

And the day at work? Not unpleasant. Despite the fact that my third period nemesis returned from a 3-day stay in “jail.” (That’d be ISS, not juvie.  He’s not that bad. Yet.)

It’s the after-work part that made the day pretty great.  I mean, look at this kid: 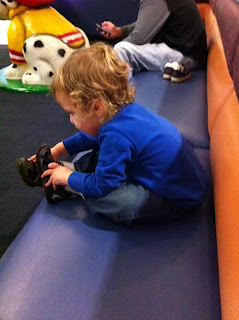 I had a Groupon to Gap, so Joshua and I hit the mall after work.  Gap Body ultra low-rise hipsters beat the pants off anything Victoria’s Secret has to offer. No contest. So I got some undies and he got to play at the soft play area.  Only he didn’t want to play.  He wanted to take his shoes off, sit on the bench next to me, throw one shoe in the floor, climb down and pick it up, wash, rinse, repeat.  It was…odd?

Normally, he loves the soft play area.  I can barely keep tabs on him! I don’t know if it was because the place was darker than usual since the sun had gone down and it normally receives a lot of sun from the sky light or if he just wanted to stick close to his Mama, but he wasn’t interested in running and playing. Which was alright with me.

Dan met us for dinner at the food court and Joshua nommed on some fries.

Then? Then things got REALLY cute. 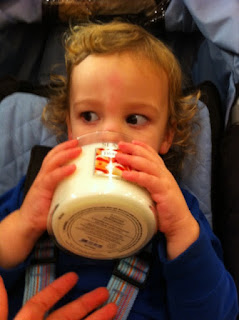 Why, yes. That is my son smelling a Twisted Peppermint candle from Bath and Body Works.

We took a quick stroll in there to smell the candles and Joshua wanted to smell too.  Because, I mean, why not?  We left when he decided the candle should be a scratch-n-taste. (He was not amused. Apparently the candles don’t actually taste as good as they smell.)

On the way home tonight, he laughed and chattered away in the back seat, saying “MAma” over and over and over.  And I breathed sighs of contentment.  Sighs of peace.

He laughed through his bath and kept showing me the “Kack Kack” in his bath time book while I brushed his teeth. (Kack kack=quack quack=duck, in case you don’t speak Toddler.)

Then I did that thing where I tickle his armpits to get that deep belly laugh that is so hard and heavy he stops breathing for a second and then takes a super deep breath to correct himself before laughing again. And he laughed some more as he clutched Curious George while Dan gave him his sippy of milk.

He laughs so much.  And his laughter is so good for my soul.  So, so good.

If you haven’t already, please take a moment to answer a few survey questions.  The response has been great so far, and it’s really helped me see some things about my blogging habits.  I sincerely appreciate everyone who has taken the time to answer.

And?  Did you see there’s a GIVEAWAY happening right now??  You know you want to win some Christmas ornaments!