October 15th, today, is Pregnancy and Infant Loss Awareness Day.  A day like this shouldn’t have to exist.  But it does.  So today, we honor the memory of those sweet babies who have changed the lives of people they will never know.

Today, in honor of this day, my friend Alesa is sharing the story of her son, Miller Denton Smith.

Alesa and I met in college and upon meeting discovered that we’d grown up in the same town.  Had probably passed each other at the mall on many occasions.  We lost touch after she graduated and moved back home to start teaching.  Thanks to the wonder of Facebook, we reconnected, and it was shortly after that that I first read Miller’s story.

If you are a mom, you can probably recall the emotions you felt when you found out you were pregnant for the first time.  You may have experienced a mixture of emotions.  Happiness, fear, anxiety, excitement, surprise—these are just a few of the emotions I felt all at once when my husband and I found out we were pregnant on September 1, 2008.  We had been married less than 2 months before, so we were shocked to discover that we were already pregnant.  Life, as we knew it, was forever changed as of that moment.  At this time, we did not yet realize how completely and deeply this change would go.

My pregnancy was a seemingly normal pregnancy.  We went through the exciting times of finding out the gender, spending hours of toying with names, searching for how we wanted to decorate the nursery, as well as the not so exciting times of the always-increasing clothes sizes, fatigue and hormonal-induced mood swings!  With an anticipated due date of April 20, 2009, you can imagine the fear that consumed us as I began experiencing some abnormal symptoms between Christmas and New Year’s, at a mere 23 weeks.

After an emergency room visit, we expected our fears to be relieved. Upon further examination, however, our fears only grew as we learned that I had what is called cervical insufficiency.  This is where the cervix basically dissolves, causing premature birth.  We were immediately rushed by ambulance to a nearby hospital with a better maternal care center and NICU.  Upon arrival, we were optimistic that I could wait at least four weeks before delivering our Miller.  As most of us know, things almost never go as planned.  This was no exception.  After less than 24 hours, I was wheeled in for an emergency c-section, with no less than 20 doctors, nurses, and technicians, who from the time of incision, were able to deliver our Miller in only six minutes. 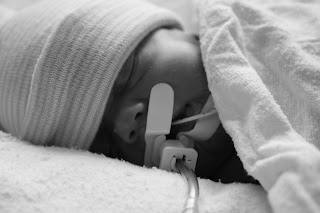 From the moment of his birth, I felt both helpless and responsible as a mother. I felt that my body had let Miller down, and that it was my fault he was born so early.  There was nothing I could do to help him or to save him.  And then there was the excruciating pain of not being able to hold him after he was born.   I was only able to catch a glimpse of him from across the room, yearning to hold him and filled with fear as they wheeled him to the NICU.  Nothing was happening as it was supposed to. Having children was supposed to be easy, a natural part of life.  Children are supposed to be born healthy and happy and everyone lives happily ever after.  How I wish this was true.

We began the new year of 2009 with the NICU as our new home.  We were optimistic, and somewhat naïve.  We knew that the future ahead of us would be an emotional rollercoaster, but we were ready for the ride, no matter how long. Miller’s tiny body experienced more than most bodies experience in a lifetime. He survived his first two days, which is a critical period and the first of the many milestones he needed to surpass.

Then there was the “honeymoon” period where things look ideal for micro babies but is always followed with some sort of complications or issues. He underwent heart surgery to close the PDA that naturally closes on most term babies.  His brain was scanned for bleeds that almost always occur with tiny babies. There was always some sort of obstacle or step to overcome.  However, we loved that baby boy more than life itself and could not imagine being anywhere else.  We took life minute by minute, and treasured every second of it.

The first time you hold your child should be a moment of joy.  However, the first time we were able to hold Miller he was less than two weeks old, and we were told to say our good-byes.  He had fallen victim to an intestinal virus, and in one short afternoon, we watched Miller’s progress take a sudden turn and we were now faced with saying goodbye to the baby, our baby, whom we had yet to even hold.  Another miracle was realized as Miller fought to live and shocked everyone by overcoming the worst of odds and seeing the dawn of a new day.

We sat next to Miller almost around the clock.  The constant alarms and flashing lights of the NICU can take a mental and physical toll on a parent.  Those alarms and lights and the sounds of nurses and of the oscillator that helped him breathe.  All of these sights and sounds were constant reminders of Miller’s uncertain world.

We became dependent on all of the miracles workers of the NICU.  They became friends and life-sustainers equally.  For micro-babies like Miller, and others with dire sickness or serious conditions, every day that passes in the NICU is a miracle and only happens because of the hand of God and the advances of medical science. But in spite of the amazing ability of the doctors, nurses and staff, there is so much that remains an unknown…

For the next couple of months, Miller’s very own will, the expertise and dedication of the NICU, and the prayers of the thousands of family, friends, and strangers world-wide who now followed his story, kept him alive when he shouldn’t have been. There were more surgeries to remove intestines that had been overtaken by the virus and too often we were told to say our goodbyes to him. However, as the cold winter months began to change into spring, Miller overcame obstacles his doctors thought he couldn’t. The doctors could give no explanation for his continued survival.

He defied medical science and opened the eyes of doctors, perhaps shining a new light on the theories and statistics that are viewed as a given. When he had not peed for 7 days, doctors said babies NEVER peed after 7 days. We should just resolve the fact that his kidneys would shut down, and Miller would soon die. Miller peed on Day 8.  Miller grew and began to thrive. This brought hope and encouragement where there was none before, and it provided opportunities to stretch the limits of a finite science often complicated by the cost of bed space. We actually came to the point in time where Miller’s next surgery was to begin repairing what was left of his intestines.

The day that Miller’s intestines were to be repaired was our happiest day yet. We were filled with so much hope and joy, and we were already planning for the future when we would be taking Miller home.  The excitement of this promising news shared by everyone was abruptly ended when the surgery brought devastation. It was discovered that Miller’s intestines had deteriorated beyond repair. There simply were not enough intestines left to repair.

After 100 days of life in the NICU, Miller passed away on Good Friday, April 10, 2010.  His passing was one that was timed perfectly.  He was held by all four of his grandparents, as well as by aunts, cousins, and pastors.  He was surrounded by love and prayer even into the very second he entered Heaven’s gates.  As the machines signaled the death of his body, his face signaled the birth of his spiritual body in Heaven. He left this earth with a smile on his face that can only be explained by seeing the face of Jesus.  While devastated, we knew that our Miller was in God’s presence at that very moment, and will be for eternity until we joined him.

And now, almost 2 years after his birth, and a year and a half after his death, his legacy continues to live.  While my husband and I were angry at God for a long time, we can see that God has used and continues to use Miller in a mighty way. A way He could not use Miller perhaps had he lived.  Lives are still touched by Miller’s story.  People continue to come to know God because of Miller.  Doctors and nurses continue to search for answers that could help save other babies like Miller. He has been an inspiration for organizations such as the March of Dimes.  God clearly had a higher purpose for Miller, and we believe that his story is one that begs to be shared.
I believe that the worst feeling a mother can have is the loss of a child. I cannot imagine anything that would compare to the feeling of emptiness, despair, and heartache.  There will forever be a hole in my heart that will only be filled when Miller greets me when I meet Jesus.  Some of you may have experienced the loss of an infant.  My heart breaks for you to know your pain and suffering.  Know that you are not alone.  Know that there are people with whom you can share your grief, memories, and joys.  Know that we will not stop our work until all babies are born healthy. 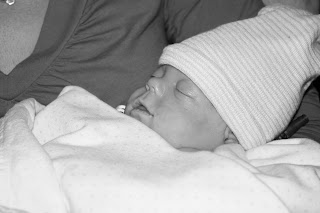 If you would like to read more about Miller’s journey, visit
www.caringbridge.org/visit/millersmith

For Miller, Mary, Gabe, Katie Jane, Matthew, Aidan, Jillian, McKenzie, Rory, and all the other angels who left this world too soon.  For the mothers who’ve had to say goodbye before they got to see the faces of their sweet babies.

Clicking on the icon above will take you to the March of Dimes donation page that has been set up in Miller’s memory.  Please consider donating to give all babies a healthy start.
Click here to cancel reply.

[...] Miller was born too soon and was far too sweet for this earth. His 100 days of life were more full of fight than many of us have to muster in much longer lifetimes. [...]