YAY!!  I was so happy to log into my email last night and this morning and see that so many of y’all left some comment love for Katie on yesterday’s post about Band Camp. It’s quite the difference from the usual talk of poop, naps, and cranky toddlers!  THANK YOU, READERS 🙂
Today’s post comes from Nicci at Changing the Universe and she included PICTURES of the awesome.  (Go visit her blog! Look at her cutie boy, Aric!)  If I had to title her post, I’d call it “Music is Awesome” because that’s what she’s talking about today.  She was in band because she loved the music.  That’s an awesome thing, if you ask me.  I love music.
So, here’s her story.  I’m heading back outside to sweat some more.
_______________________________________________________________________
When I saw Miranda asking for Band Camp stories, I couldn’t resist offering myself as a guest blogger. Granted, I’ve never actually been to Band Camp (other than Pre-School Band Camp, as we lovingly referred to our practices two weeks before school started every year), but I assure you, if I would have been given the opportunity, I would have taken it!
You see, I am the classic Band Nerd. Not Band Geek. Geek refers to technological talent (i.e. Computer Geek). I mean Nerd, as in I played Magic the Gathering on the weekends (ok, I didn’t really play, but my friends all did and I watched them play. Oh God, that’s worse than playing. Ok, never mind I said anything). 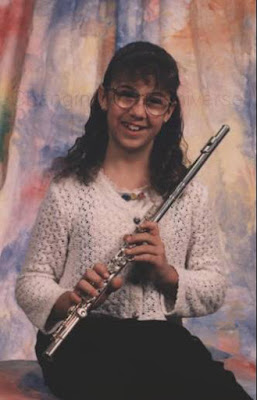 I wasn’t in band because I wanted to make a career out of it. No, I was in band because I FREAKIN LOVED BAND!! All of my friends were in band. We took awesome trips. And most importantly, I love band music.
Thing is, I was good, too. I could have been really good if I’d set my mind to it. But because I was in it for fun, I slacked off during chair try-outs, landed myself in the 2nd row of flutes (yep, 2nd part!) and had the time of my life! My stand partner was one of my best friends in high school. We hid magazine cutouts of Mark McGrath in our pep band music so we could be pleasantly “surprised” when he showed up at a hockey game.
Don’t get me wrong, I was cool, too. I dated a football player! Never mind that he was also the tuba player in band. And that at our homecoming field show he stuffed himself into his Sousaphone, football pads and all, to play instead of going to the locker room with the rest of his teammates.
Some of my favorite nights in high school were the nights spent at various sports games in the pep band. We had a requirement that stated we had to play in at least 4 pep band events in a trimester. I played in every. single. one. Pep band, for us, was a night to socialize with our fellow Band Nerds. We’d bring homework and card games so that during the game we’d have something entertaining to do (remember, we’re in band. Not sports. Therefore sports = boring).
Concerts were just as fun. We all looked forward to the end of the concerts when we’d all head out to Baker’s Square and try and get ourselves kicked out. Side note: we were never successful. Even the time we made a tower out of menus and knocked it down with bouncy balls. Or the time one guy put a water glass completely inside his mouth, then bit down, causing the glass to shatter. They had a lot of patience for us.
But the most fun I ever had in high school band was on our band trips. As a sophomore, we went to Disneyland, then as a senior (trips were every other year) we headed to Disney World. Ho-ly crap was that fun. Sure it was full of angst-y teenage drama, but it was also full of “holy crap we are a bunch of teenagers without our parents let loose in Disney World and we are gonna make the most of it!” Oh yeah, and we played concerts and marched in parades, too. Detail, details 🙂 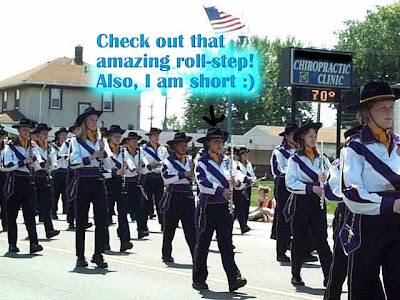 Fun with friends aside, I really loved band for the music. I would sit with my friends on the weekend and listen to classic jazz musicians such as Dizzy Gillespie, Duke Ellington, and Louis Armstrong. We’d have arguments over which instrument was better, saxophone or trumpet (my vote was always trumpet). We’d watch old tapes of popular drum corps performances and mock our own marching band for being horrible compared to these groups. I fell in love with the song “Malaguena,” especially the version played by Blast. In fact, I played it almost every night while I was pregnant with Aric, in hopes that he would emerge a trumpet player.
I played in the marching band and the wind ensemble in college, but that wasn’t nearly as fun. Sure the music we played was great, but the company was not. They were all in it as music majors/minors, whereas I was in it for the fun of being in it. Apparently that makes you an outcast, which took all the fun out of playing. 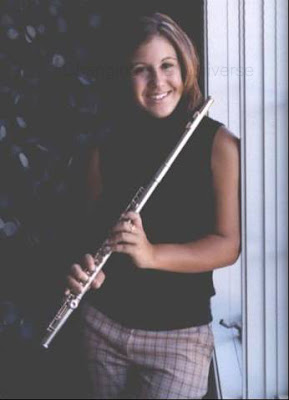 I will always look fondly on my years in band. I made some lifelong friends and met people that I will never forget. And when someone calls me a Band Nerd, I will proudly admit that yes, I am a Band Nerd and yes, I do have a perfect roll step, which comes in handy when getting coffee from one end of the office building to the other without spilling.
Click here to cancel reply.