That, I think, is how you know you’ve been sufficiently peeved off by the mothers at the indoor playground at the mall.

When we were at the mall on Sunday, I saw some yoga/athletic shorts at GapBody, but Joshua had a meltdown of epic proportions so we had to leave in a hurry.  Today was the first opportunity I’ve had to go back to the mall to look at the shorts.

Shopping was pretty quick and painless.  (They are yoga shorts.  They feel like they were made for my giant backside.  That’s how comfortable they are.  So, painless is a GREAT way to describe it.  Now if only I could figure out how to convince my employers that they are work appropriate…)

So, because Joshua was an ANGEL in his stroller while we were at the mall, which is sooooooo not his style, and because we had some time to kill, we went down to the indoor playground.  And that’s where our trip to the mall started to stress me out.

First of all, it bugs me that moms let their kids play there when the kids are CLEARLY too tall according to the sign posted outside.  BUGS. ME.  If your child is in late elementary school, your child should NOT be climbing all over the play place and running like a hooligan when there are TODDLERS afoot.  Period.  Especially when you aren’t making sure that your too-tall hooligan is watching out for the toddlers as they are running around like crazy people.

But that’s not even really what this is about.  That just bugs me and is a general Public Service Announcement.

What really peeves me off about the playground is that PARENTS ARE RESPONSIBLE FOR THEIR CHILD WHEN THEIR CHILD IS IN THE PLAYGROUND.

When you walk through the entrance, magic babysitters don’t appear to take care of your child.

YOU ARE RESPONSIBLE.  PUT DOWN YOUR EFFING PHONE and pay attention!  Don’t just sit there having a conversation with God only knows whom.  Watch your child.

If your child wanders away, get off your ass and move.  Keep him or her in your sights at all times.

Joshua was playing.  He was having a grand old time.  Another little boy, maybe 2 and a half or 3, ran into him. HARD. And knocked him down.  In this scuffle, Joshua got a bump AND a scratch on his head.  I can only assume this scratch came from a fingernail, a toenail, or a tooth.

I run over to scoop up my child who is doing that suck-in-the-air-but-can’t-get-the-scream-to-come-out breathing thing and this little boy’s mom?  Nowhere.  Even after the scream of my child becomes audible, no one except the few mothers sitting near me bother to look up.

On the one hand, I suppose they were just kind of aware of a crying child but knew it wasn’t theirs and didn’t think there would be a need to investigate further.  On the other hand, if I knew my child wasn’t within my sights, I’d still want to know where my child was because if I heard a child screaming like Joshua was screaming, I’d want to know if that child was the only child who was hurt.

So, I scoop him up.  I’m soothing him.  I’m “Shhhh”ing him.  I’m telling him it’s okay and checking him over for bumps, scrapes, and broken bones.  The offender sits on the steps staring at me with a look of ::blank:: on his face.  There was nothing.  No remorse. No happiness.  No nothing.  Just blank.

I don’t even know what to make of that.  The nothing-ness on his face.

In the midst of soothing my child, another little one wandered up to our diaper bag and tried to five-finger discount Joshua’s Goldfish.  So I take the little bowl of crackers away from this child (and he looks at me like I’ve broken his heart) and try to find the child’s mother.  No luck.

WHERE ARE THESE CHILDREN’S MOTHERS???

Joshua didn’t really want to play much after that.  For obvious reasons.  And I was getting looks from the mother in the ridiculously high heels who had her boobs on display (and was wearing a too-short dress and had a visible THONG line) so we decided to leave.  (Really??  You’re dressed like a floozy AT A PLAYGROUND and you’re giving ME looks because my kid is crying??  REALLY?)

In addition to watching your child to make sure he or she is not rapidly becoming a Little Baby Bully, playground etiquette also stipulates that you CLEAN UP after your children.

While I was packing up our stuff, a boy climbed on top of this giant panda thing.  And his mom came over to him, smacking on her gum.  And I see something fall toward the ground.  And I look back at them and mom is still smacking away.  But little boy suddenly isn’t.  The mom looked at the gum on the ground and she looked at me and THEN SHE WALKED AWAY.

She walked away.  And left her son’s CHEWING GUM on the PLAYGROUND.

I don’t even know what to say about that except EW.

Since I don’t have a suitable way to end this rant-y post except for to keep on ranting, I’m just going to stop now and show you what Joshua does when we say “SMILE.”  It’ll be a much more suitable ending. 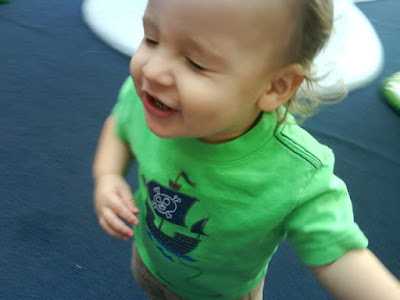 This is pre-scuffle with the Bully.  Isn’t he presh!?  I love him.
Okay, I feel less irritated now.
Click here to cancel reply.