It’s a Twitter Blog Hop, y’all!  And this one is awesome.  It’s about weddings.  I love weddings.

I’m a bit, um, controlling? when it comes to having things MY way.  Especially when those things are my WEDDING.  Which was a pretty monumental occasion as I can guarantee that save for death, I’m never doing THAT again (even though I secretly want to renew our vows just so I can do it all over again because I loved it that much).

I was a budget bride.  We were a budget couple.  Sometimes it really sucked.  There were things about the wedding that I’d change if I had it to do all over again knowing what I know now.  Like the venue.  My first choice venue at the time that I toured them didn’t have any sort of banquet facility for the reception.  While I was planning my wedding, and after I’d already signed a contract on another place, my first choice facility built an awesome banquet “barn” thing (classic, rustic, charming, beautiful) that would’ve been available for my wedding.  But they didn’t tell me that was even in the works when I met with them and fell in love with the place.

(If you’re wondering why I didn’t go with my first choice place anyway, it’s because the rental of tables, chairs, tents, etc. plus the fee for renting the facility would’ve eaten up my entire budget.)

Another thing I’d change, and I’m sorry Mom, but this is 100% true, I would’ve served beer and wine and I would’ve had a champagne toast.  I don’t think people really had a good time at my wedding because 1) it was the HOTTEST FREAKING DAY IN MAY and 2) oh yeah, it was the hottest freaking day in May.  So no one danced because they would’ve had to dance outside because the venue didn’t allow music inside since it was such an old, old home and they didn’t want anything ruined by vibration or gyrating or something.  In addition to serving beer and wine, I would’ve rented a small dance floor to put in the grass next to the place where we held the ceremony.

We still had a pretty awesome wedding.

(sidenote:  I found a new obsession this morning and that obsession is photo storyboards made with Picasa.  Expect more of them in the future, mmkay?)
(another sidenote : All of my wedding photos were taken with film instead of digital and then I had them burned to a CD when they were developed which is why some of them are grainy.) 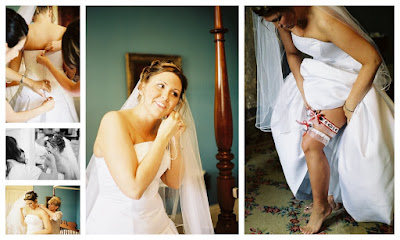 “Gooooooo Dawgs! Sic ’em!  Woof woof woof woof woof!”
Did I mention it was hot that day? During my senior year of college, I developed a condition my doctors called “Chronic Urticaria” which basically meant that at random times, I’d break out into hives.  Itchy, giant, red, splotchy hives. So my bridesmaids were all tasked with dabbing me with ice cubes whenever they thought they saw a hive forming.  They were fantastic at this task.  They were also fantastic at keeping me from going crazylady over the decor downstairs and they flapped and fluffed and got the tablecloths on the tables and the centerpieces in place before I even had the chance to do any of it. AWESOME GIRLS. 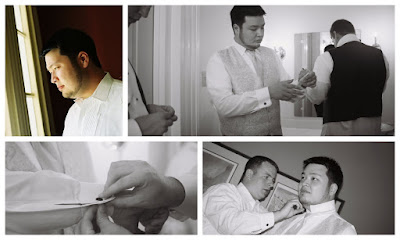 My man in a tux.  ::swoon::
Dan and his groomsmen also played double-duty that day.  While my bridesmaids threw the centerpieces up before getting ready, the guys all came out to the venue that morning to set up the outside of the site.  We couldn’t get in until noon (or one?) but we couldn’t wait until that time to set up the chairs and the columns, so Dan and the guys got up early that morning and, using a diagram I drew for them regarding chair placement, they arranged the chairs, and put up the columns, and one of the guys decorated the columns all by himself.  Awesome.  They did a fantastic job!  (Unfortunately, I am not sharing the full-view picture because there is a van in the background–GRRRRR.) 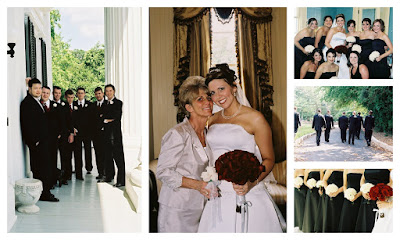 That’s my Mama and me.  Isn’t she beautiful!?  Y’all say “Hiii!”
Mrs. Trophy Wife JUST wrote about wedding season in the South and I had to laugh at half of what she wrote because IT IS TRUE.  Especially the part about having large wedding parties.  And ours isn’t even the largest I’ve ever seen.  But still, for only 85ish people to be in attendance and for there to be a wedding party of 12, that’s pretty big!  But I wouldn’t have had it any other way.  Except I would’ve had two more bridesmaids and I would’ve let them choose their own dress instead of all wearing the same one.  So I guess I would’ve had it another way. 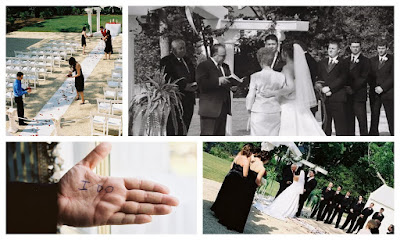 The ceremony, which we expected to last for 20 minutes, felt like it lasted for 5.  It is alarming how quickly it flew past after months and months of preparation.  I liked the “I Do” cheatsheet picture that I saw floating around the Knot so I had the photographer take it before the ceremony.  Then, during the ceremony when it was time for Dan to say those lines, he faked stumbling over the words for a minute and then looked at his hand and said “I DO.”  Everyone laughed.  It was awesome.  That’s what I love most about him, I think.  The fact that he can always make me laugh.  Even when I don’t want to. 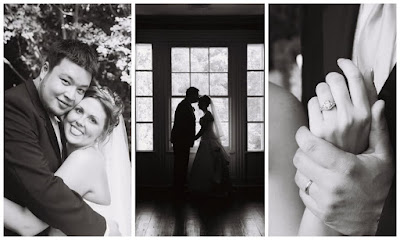 Yay!  We’re married!
The middle picture up there is my absolute favorite of the entire day.  I remember that moment.  I know I asked for that photo to be taken so it was planned, but it was a great moment.
The Devil in the Details: 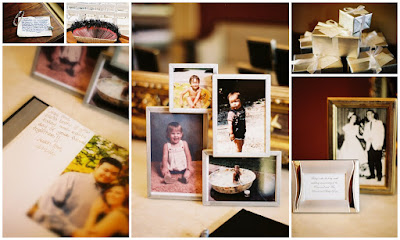 The note that accompanied my “Something Blue” from my sister-in-law, our programs, our guestbook, our baby pictures, the groomsmen gifts, and a picture of my pastor and his wife on their wedding day, which is a date we now share since we got married on their anniversary. 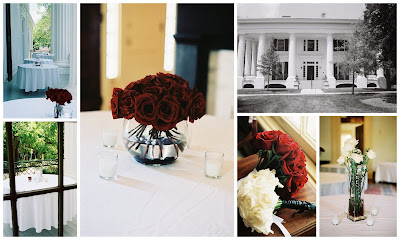 The side porch of the venue and a view of the garden from inside the house, one of my centerpieces, the venue, my bouquet and a bridesmaids bouquet, and another centerpiece.
I love reliving this day through the pictures. Yay June Blog Hop! (Also, there’s a giveaway happening here.)
Now it’s your turn to join in the Blog Hop and share memories and pictures from YOUR wedding day!
Click here to cancel reply.