I know, I know, I’m a horrible slacker for not finishing this yesterday, or Wednesday. But let me just tell you that yesterday, I SLEPT IN.  That’s right.  I got to sleep until NOON.  I’ve paid for a full week of daycare, so I decided that Joshua would go yesterday and today since they were paid for.  And yesterday, after dropping him off, I went to sleep.  And then I went to Target.  And then I made it out of Target with only spending $5. Yes, FIVE DOLLARS.  (That might be 1) a first, and 2) impossible to repeat.)

And did I mention that the dog kept puking? She woke us up twice on Wednesday night/Thursday morning, then puked again on Thursday afternoon.  So far, so good today.

The Best of our Mini-Vacation

No, I’m not pregnant. No, negotiations for Baby Human 2 have not commenced.  I know some of y’all were probably hoping or expecting a big announcement of some sort, but I’m trying to let you down easy.  This ute is closed for tenants until further notice.

So, now that we got that out of the way… here’s the real best of our vacation:

We laughed.  We laughed at how much Joshua loved being outside.  We laughed at funny things he did in the hotel room.  We laughed at how cute it was when he’d stick his head up over the pack-n-play and “talk.”  We laughed at how he sleeps wrapped up like a burrito.  And we laughed at the fact that when a soda explodes in your freezer it will sound like a gunshot. And your husband’s line of thinking will be a bit illogical.
Y’all, the refrigerator in our hotel room was freakishly cold.  Everything liquid we stored in there got ice chips. And one Diet Pepsi in particular got so cold it froze solid-ish. And exploded.  After Joshua had gone to sleep for the night.
And it sounded like a gun shot.
Dan jumped off the bed and mouthed “WHAT WAS THAT??? WAS THAT A GUNSHOT?” and he’s all crazy-eyed like he needs to be a superhero and go investigate or call the police.  And I look over and see that the refrigerator door is slightly ajar and I say “I think a Diet Pepsi might’ve exploded.” And he’s all “Oh…yeah..that makes sense.”
But y’all.  EXPLODE IT DID.  It was all over the inside of that refrigerator. Slushie-ice-diet-pepsi all over the inside.  Even in the moment, it was hilarious.  It’s good to laugh with my husband.  Really good.  Aside from make cute kids, it might be one of the best things we do together.

The best part?  Joshua slept through the whole thing. And his pack-n-play was less than six feet from the mini-fridge.

If Joshua liked the swimming pool, he LOVED the ocean. Like, with cherries on top loved it. I spent many summers in North FL. as a child and I remember being taken to this beach.  I’m sure that somewhere in  a shoebox in a closet, there are pictures of me in this water.  And that’s pretty cool.  So, I was so overjoyed to see how much Joshua LOVED the beach.  He wasn’t freaked out by the sand under his toes and was content to monster around the beach and would’ve been content to do so all afternoon.  He wasn’t SO sure when we stood in the water and the receding tide pulled the sand out from underneath his feet, but he loved it. 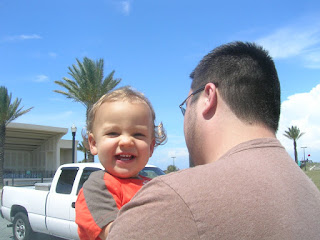 Look at that smile! And he hasn’t even seen the ocean yet! 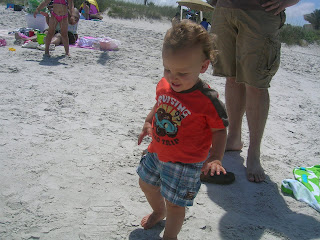 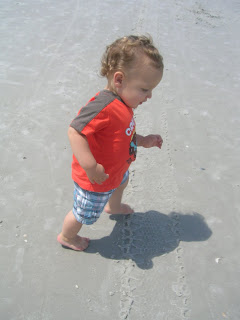 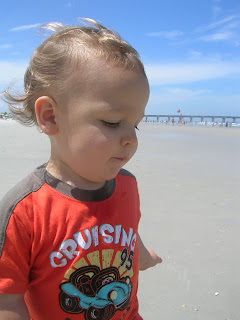 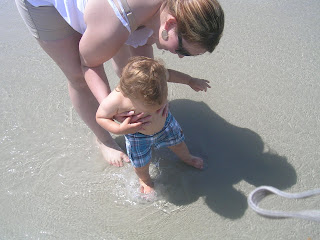 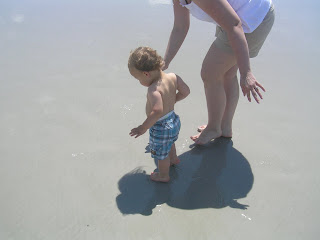 And then we left the beach because we hadn’t expected him to like it that much so we didn’t wear/pack our swimsuits.  But that was an exciting half-hour, y’all. The joy on his face! Hearing him squeal with delight! It was awesome.  It really confirmed for me that maybe I don’t have the most miserable baby on the planet.  Maybe I AM doing something right as his mother.
After we baby powdered him off we let him run around in the grass for a minute and then we stopped to take a couple of photos.  (sidenote–Did y’all know that the fastest way to get sand off your skin is to get a handful of baby powder and rub the sand off? Sand goes bye-bye and you’re left with smooth, smell-good skin!) 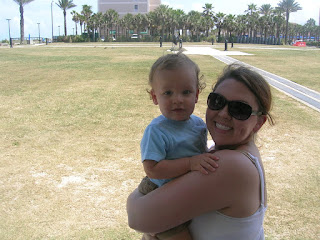 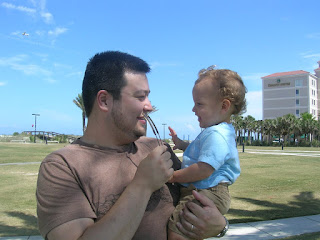 I got to take a nap with my baby.  I know we’ve talked already about how I slept for 28 hours on this trip.  But what I love is sleeping, napping, with Joshua.  There’s something so peaceful about hearing and feeling him breathe while he sleeps.  He’s growing up so fast, but when he’s asleep, he’s the closest to my little baby that he’ll ever be again.  I spent so much of his infancy being afraid to hold him while he slept for fear that I’d create some sort of monster.  But I held him anyway because it was the only way either of us got any sleep.  And I didn’t always like it.  It meant I was sleeping in uncomfortable, semi-reclined positions.
But now?  Now that he’s only still when he sleeps?  I just want to snuggle up with him and hold him and listen to him breathing.
When we put him down for his Sunday morning nap, he went down with no trouble, so we laid down, too.  About an hour into his nap, the housekeeping cart went rolling past our door and woke him up, but he obviously was only half awake.  So I grabbed him and his blanket out of the pack-n-play and he burrowed his head into my armpit and went back to sleep.  Then he woke up for half a second and collapsed with his head on my stomach.  And he slept that way for another two and a half hours.
That two and a half hours was the most peaceful, relaxing two and a half hours of the entire trip.  And I’d love to have that two and a half hours of snuggling my baby every day.
Click here to cancel reply.

Love your best post! And I totally get what you mean about when they are sleeping, they are still a baby. That's why I don't care if Em wakes up in the middle of the night and I have to rock her back to sleep. I'm rocking my baby back to sleep and I'm not sure how many more nights of that I'll get!

I LOVE this post! It makes me smile that you guys were so happy!! And Joshua is JUST like Eddie with the beach! Plus baby powder? get right out of town! best tip ever! I'm SO using that! And sleeping with the little man? That is also my fave thing ever. It's when he's still my baby and not a little monster man. Love this post, lady! Love it!

Awww, it sounds like you had so much fun! We have a mini-mini vacation (Austin) in two weeks for my birthday and this makes me look forward to it.Oh and Joshua on the beach? Quite possibly the cutest thing ever.

Your little guy is so stinkin cute! Aren't little boys the best? Glad you guys had a nice time at the beach. We're heading that way in a couple of months- I'm hoping my little man likes it as much as yours did.

Can i just say that you two make ADORABLE babies! I hope there are more to come because the world needs more dimpled, curly headed tots running around! (when the ute is good and ready, of course)

So glad you had fun at the beach! Such a great place for memories. Sigh.