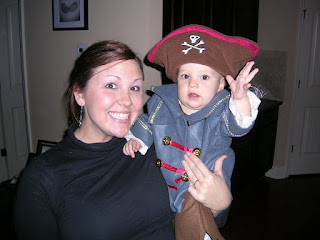 Me and my little Pirate.  Joshua says “Arrrrggghhhhh!  Give me yer candy!”
Joshua was SUCH a trooper today.
He took excellent naps before we headed over to J & T’s house to watch the Georgia/Florida game, so we were hoping he’d be a happy baby when we got there.  And he was.  Mostly.  He got a bit cranky but refused to take a nap, which is nothing new for him when we’re in a new place.  ::sigh::
Before the game was over, we decided to put the boys in their costumes and head out for “trick-or-treating” (i.e.  go to a fancy neighborhood and teach our kids to trick-or-treat where they give out the GOOD stuff  take lots of cute pictures of the boys trick-or-treating.) 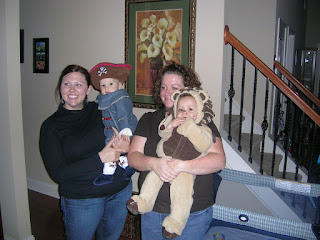 I like this one because, even though it isn’t the most flattering picture of the mommies, the boys are both looking at the camera.
It was drizzling by the time we got to the subdivision, but we were troopers. 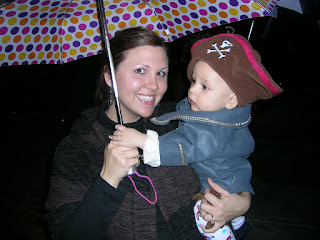 Pirate Joshua tries to help me hold the umbrella-ella-ella, eh, eh, eh….
We kept getting strange looks from homeowners as we stole their porch steps and Halloween decor to take pictures of our little guys in costume.  Some were kind of like “Umm…..y’all are weird” and others were all “oooohhhhh CUTE BABIES!” (I’d say the latter outweighed the former.  I mean, who can resist cute babies in costume??) 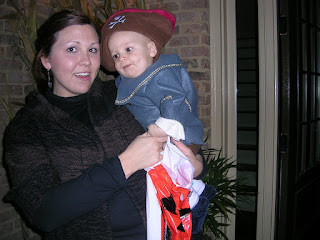 Have you ever tried to get a seven month old to look at a camera?  Yeah…you’d look like a moron, too. 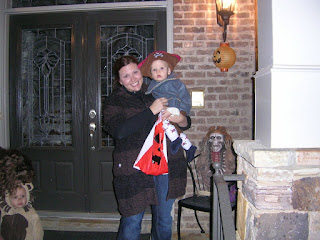 Hi, Daddy!  Can you please rescue me from this crazy woman who is supposed to be my mother but who insists on dressing me in ridiculous pieces of clothing?  Please?  I’ll give you my candy if you just rescue me. 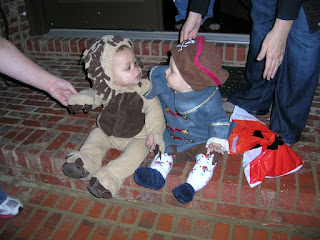 Dude, can you believe they dressed us like this?? 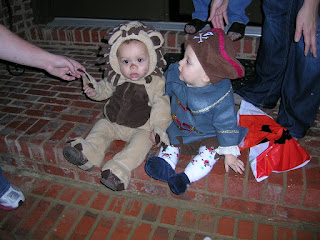 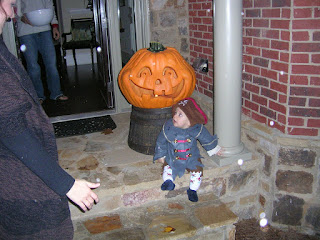 Mom, seriously.  Do you think a REAL pirate would pose with a giant, fake PUMPKIN?  No way. 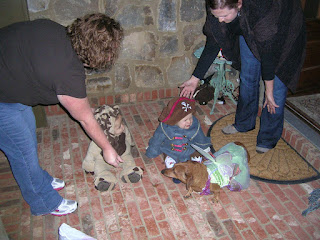 The boys were OVER trick-or-treating when this little cutie in a tutu wandered out to try and steal their candy.
Joshua was a trooper on the way home from trick-or-treating, but he fell asleep on the way.  Normally, his eyes snap open when we pull into the driveway.  Not tonight.  I was able to get him out of the carseat and hold him for a minute and he didn’t wake up at all.  I put him straight to bed, still in half of his costume.  The kid was EXHAUSTED.
I think he had a fun first Halloween.
Click here to cancel reply.

Aww, what a little cutie you have! Love the look of your blog too.

(Stopping by from SITS.)

What a couple of cutie patooties!

Stopping by from the SITS Halloween Parade!

Arrgh Matey ~ Joshua's costume is absolutely adorable! Looks like it was a wonderful Halloween! Happy SITS Saturday Sharefest (even though it's Sunday)

Joshua is absolutely ADORABLE! I just became a wife and am a teacher as well! Stopping by from SITS :)

If you are ever interested in a new blog design, I would love to work with you!www.onefineblogdesign.blogspot.com