Half a year? Really? Already gone? WHERE has it gone? I’m not sure I’ve fully appreciated the fact that he’s been with us here on the outside for six months. SIX months?! Unbelievable.

Let’s see…in the past month, he’s started napping better for the ladies at daycare and, for the past two days, for me, too. In fact, he’s the only baby in his room who naps consistently. He doesn’t sleep all night long, but he sure can sleep through the little girl in his room screaming her happy little lungs out.

He’s sitting up on his own and he’s trying so hard to figure out how to get his knees AND his hands underneath him that he’ll be crawling before I know it. He mostly practices this at 3am when I want to sleep. He thinks it’s GREAT FUN to try to crawl then. Great fun. Once he’s crawling it’ll be time to move up a room at daycare. And that saddens me a bit because I really like Ms. Nancy and I know she loves him and loves ON him.

He’s also starting rolling with a purpose. If he sees a toy on the other side of the blanket and he wants it, he just rolls right over to it. Then he whines because he can’t figure out how to get back to me.

He’s eating puffs (okay…he’s getting them stuck to his hands and then he’s shaking his hands over the sides of the highchair and he’s feeding ANNIE the puffs…but whatever…) and he likes them. We’re practicing using a sippy cup. He can pick the cup up, and he knows the spout goes in his mouth (although, sometimes, he gets the spout and the handle confused) but he hasn’t quite mastered the art of tipping it back. (Let’s hope he doesn’t master the art of tipping one back until college…)

He’s growing up so fast! SO, SO fast. 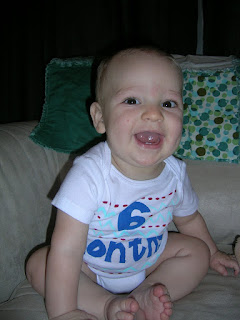 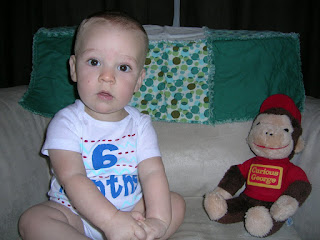 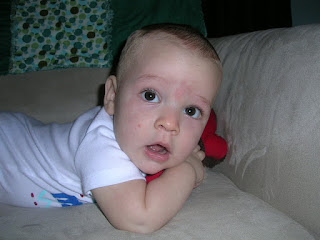 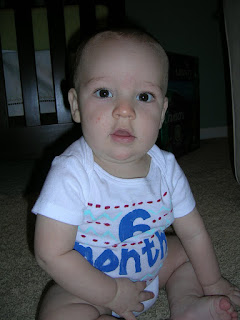 He's adorable. Those first months seem like a dream, so I hear!

Wow, six months really has flown by fast! I can't believe how big he is.