(That was always my favorite SNL skit. I liked it best with Jimmy Fallon and Tina Fey.)

Friday night Dan and I went to the mall to get a hat that matches Baby’s coming home outfit and I found some nursing tank tops on clearance in the maternity section of baby Gap. I also tried on a few nursing bras.

I have enough body image issues, people. The idea of nursing bras isn’t helping. Seriously, what is so wrong about wanting to wear a bra that gives your boobs the appearance of shapeliness?? (We all know that unless the boobs aren’t real, they aren’t perfectly round. It’s all about the bra, people.) So, why isn’t there a nursing bra that doesn’t scream to the world “THIS WOMAN MAKES FOOD WITH HER BOOBS! SEE HOW THEY’RE KIND OF POINTY AND MISSHAPEN!?!” Because that’s what I felt like that bra I tried on was SCREAMING at the mirror.

I’m sure the perfect bra for me is out there. I just didn’t find it on Friday night. I will though. I am a woman on a mission.

Saturday morning was my baby shower. I got lots of great goodies from my wonderful friends. My sister-in-law made DELICIOUS food! I wish I hadn’t reached that point in my pregnancy where I can only eat a handful of food at a time because I would’ve gone back for thirds. She also planned the one baby shower activity that I hoped someone would plan for my shower.

We painted onesies! AHH!! I loved it and I love them all! (I promise to post pictures soon. I’ll save that for tomorrow when I may not have so many words.)

Then, Dan and I headed out to Babies R Us, where I proceeded to have a meltdown over bulb syringes and rectal thermometers.

We were going to buy some of the items from our registry that we didn’t get at our showers since we had a couple of coupons. We picked up the baby monitor and a couple of bottles to try, and then he asks “Do you want to go ahead and get a baby safety kit?” because we were standing right beside them, so why not, right?

First of all, let me preface the description of my meltdown by saying that BRU was incredibly crowded yesterday. Yes, it was Saturday, but there was a TON of people there. So that got me flustered because it wasn’t easy for me to maneuver my abnormally large self through the throng of people looking for pacifiers.

Then, when we started looking at the baby safety kits (these are the kits with the medicine droppers, brushes, combs, toothbrushes, etc. in them) I got overwhelmed by all of the choices. I started to panic a little bit. I don’t even know how to use a bulb syringe, much less know which kind I need!

This kid will be there in three weeks (thereabouts, depending on who he takes after regarding punctuality) and I have no idea what I need for him. Not a clue. I’ve been saying all along that I have a carseat and boobs. What more could I need, right? I’ve got a sneaking suspicion that he’ll need a little more than that. And I have no idea what those things are.

Diapers? Yes, of course. Clothes? We’re covered for at least a few weeks. Love? Enough to last a lifetime.

Still, I have no idea if that’s enough, and it sort of freaks me out. 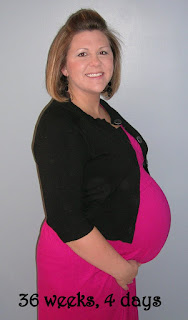 The hospital gave us a bulb syringe and all brushes and all that stuff. You'll be ok! I would make sure to have gas drops, for sure.